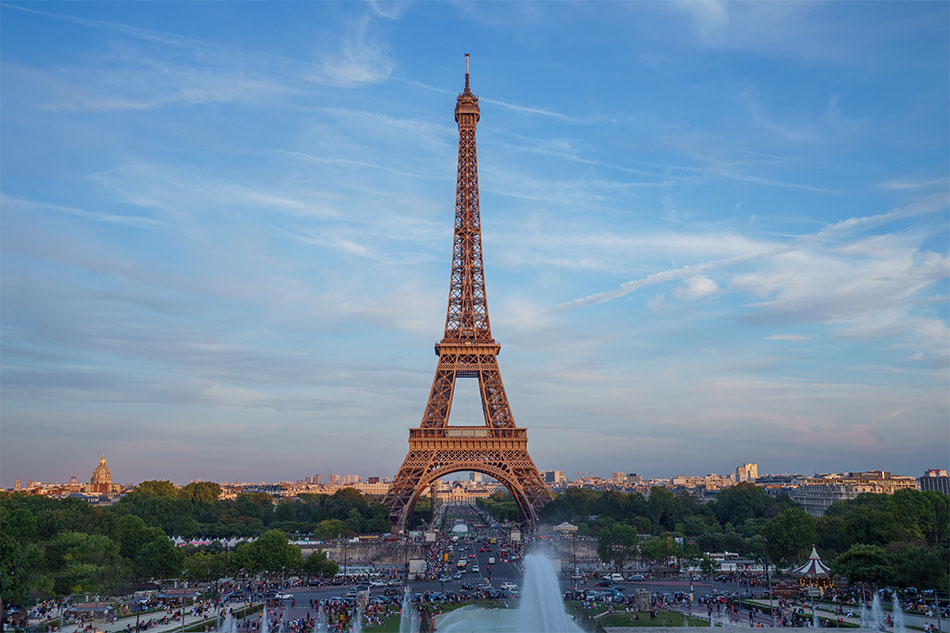 What do you think of when you think of Paris? The Eiffel Tower, Parisian fashion, Parisian luxury, yes, these are what Paris has to offer, and not only that, the city exudes charming and dazzling light, art, and cultural architecture. Walking through the beautiful streets, and sipping a cup of coffee or wine at a street-side café, is the way to feel the elegance and laziness of Paris.

Paris is the capital and largest city of France, located in the north of the country, on the west bank of the Seine River. As the political, cultural, fashion, and commercial center of France, it is the largest city on the European continent, one of the most essential cosmopolitan cities in the world, and one of the most prosperous cities in the world. Under the dazzling lights of this fashionable capital, the Seine River and the city reflect each other, forming a rhythmic landscape. 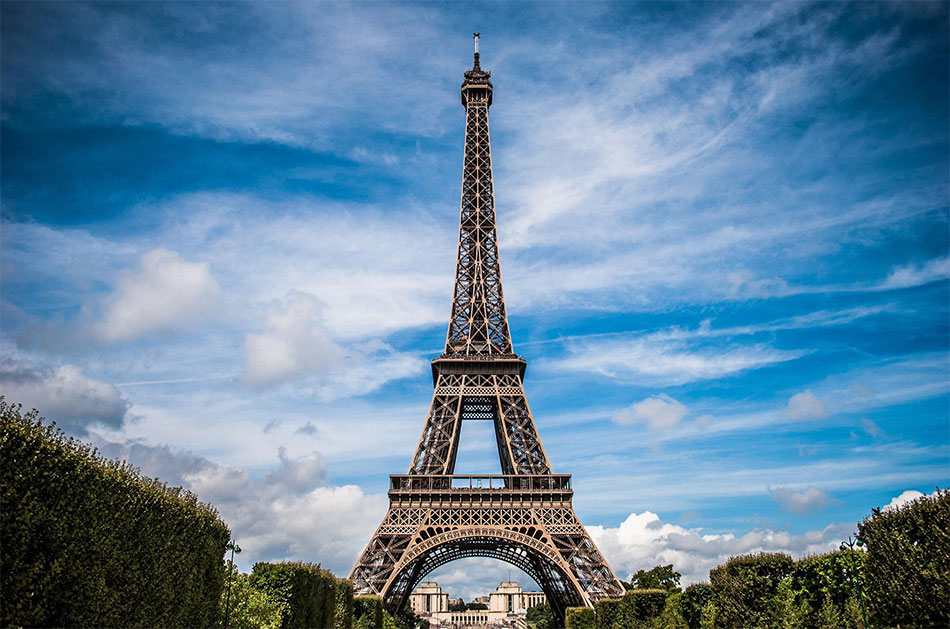 The Eiffel Tower is a well-known landmark in Paris. It was built to commemorate the 100th anniversary of the French Revolution by French engineer Gustave Eiffel and displayed to the public at the 1889 Paris World's Fair. The Eiffel Tower in Paris, at 324 meters high, is one of the most visited and most visited attractions in France, with up to several million visitors coming each year to see the amazing architecture.

However, to visit the viewing platform, you need to buy tickets at the bottom of the tower, elevator tickets and climbing tickets are sold in different places; you have to determine the type of tickets to buy and choose the right window to buy them. If you come with your loved one, it is recommended that you go up to the tower to see the view, which will provide you with a romantic and unforgettable experience. 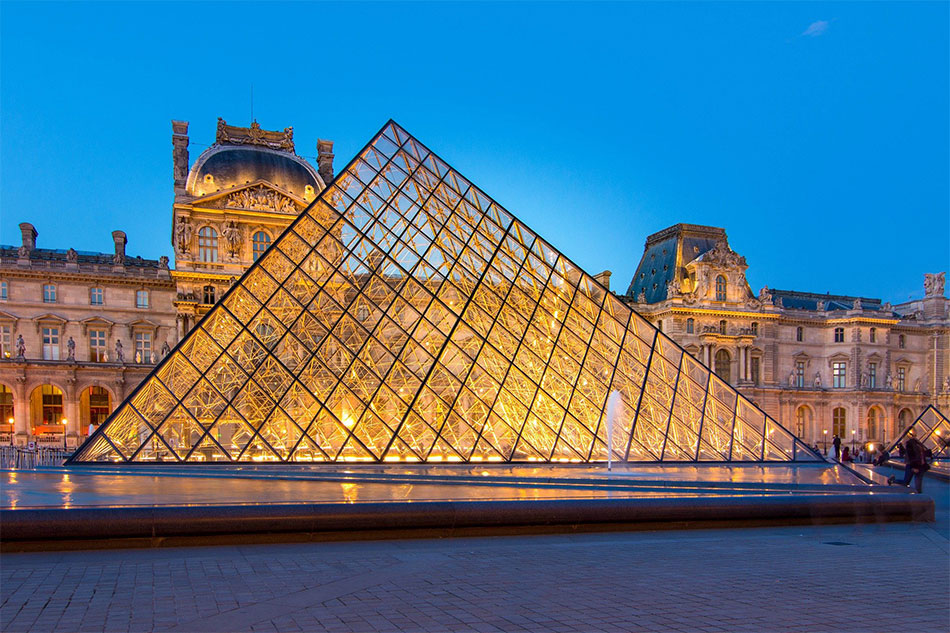 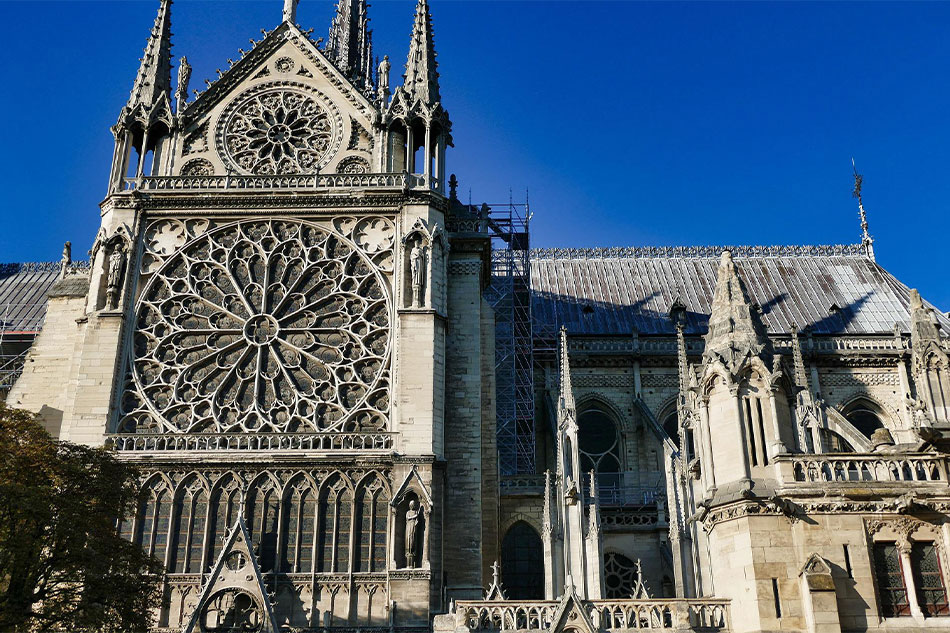 Notre Dame de Paris, a Catholic church, is one of the most representative buildings in Paris and even one of the most outstanding representatives of Gothic architecture in France and Europe, located in the middle of the Seine River on the Cote d'Or. Construction began in 1163 and took nearly 180 years to build the fantastic building we see today, which is now a popular tourist attraction in Paris, with a constant stream of visitors every year.

The best way to visit Notre Dame is to start from the outside of Notre Dame, enter the inner sanctum of Notre Dame, and finally climb the 387 steps to the top of Notre Dame. If you wish to see more, be sure to take a look at the top, as the top floor offers the classic Notre Dame Rooftop Monster sculpture and stunning views of Notre Dame's surroundings. When you're done wandering the area quickly, you can also experience a cruise on the Seine River, enjoy a delicious dinner, stroll, and take photos. 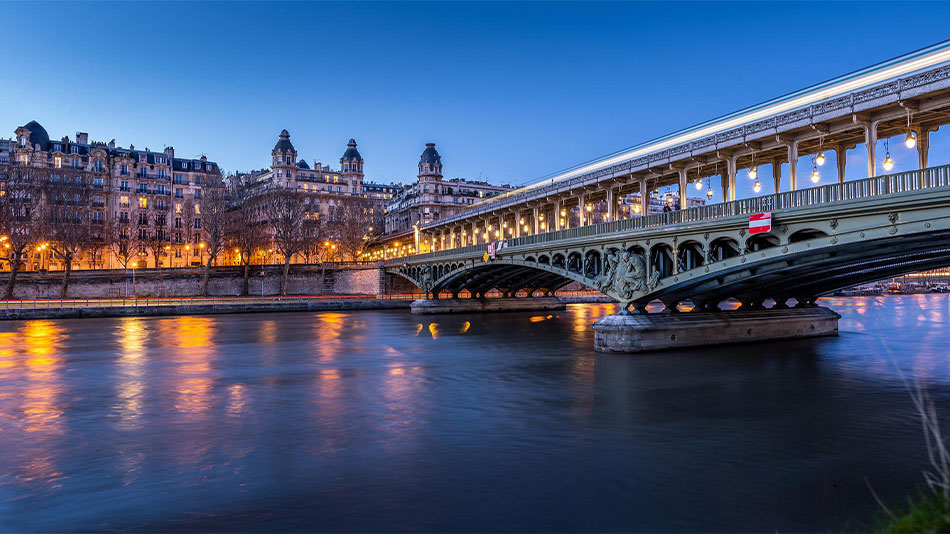 There are many ways to visit Paris, but one of the unique experiences is to take a Seine River cruise at sunset, where you will see the most beautiful view of Paris as the boat swings along the long and winding Seine River. The light of the setting sun reflects beautifully on the tall old buildings. You may also see the Eiffel Tower, Notre Dame, the Louvre, and the Alexandre III Bridge while on the cruise, which is an unforgettable experience and a chance to feel the romance of Paris.

If you cruise with your loved one, you can enjoy a French meal on a Seine boat and revel in the pleasure of the food and the beauty.

In addition, it is worth surprising that the Eiffel Tower here in Paris will be lit up for 5 minutes every night at one point, all the spotlights will be lit up and the lights will illuminate the whole Paris, which will also be the most dazzling moment in Paris, you can press the shutter when the lights are on to record the most beautiful scenery. 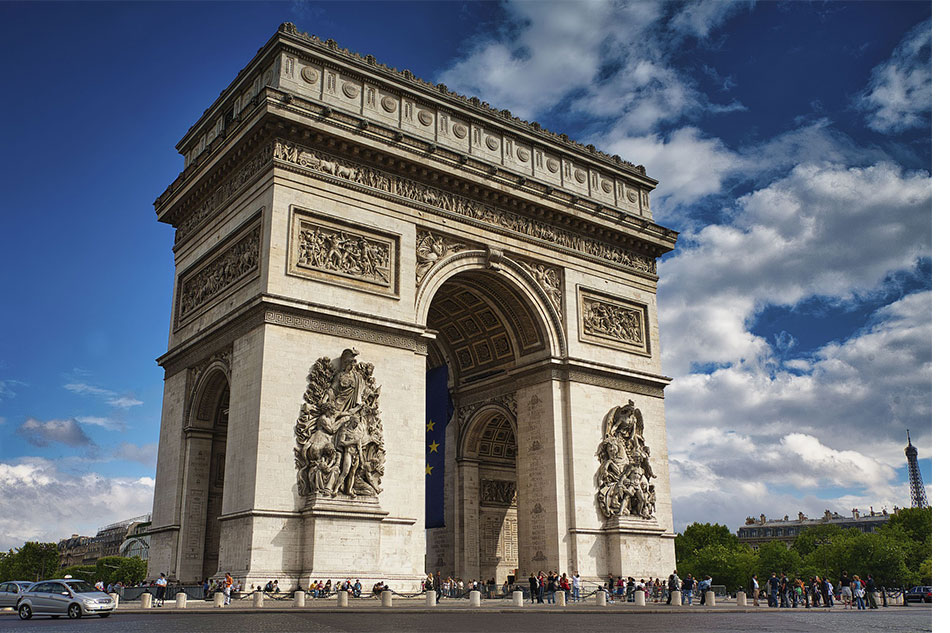 The Arc de Triomphe, commissioned by Napoleon I, was built by Gene Chargrand in the early nineteenth century to commemorate the French army's victory over the Russian and Austrian allies. It stands 50 meters tall, 45 meters long, and 22 meters wide on a star-shaped square on Paris' romantic Champs-Élysées avenue. A large terrace above the Arc de Triomphe provides visitors with a perfect panoramic view of the Champs-Elysées.

The Champs Elysees, the world's most beautiful avenue, is 1.9 kilometers long and runs between the Arc de Triomphe and the Place de la Concorde. This avenue, which is home to the world's luxury brands (Louis Vuitton, Cartier, Guerlain, Montblanc, Dior), classic Lido nightclubs, and various exquisite cafes and French restaurants, attracts tourists from all over the world daily, reflecting its allure. 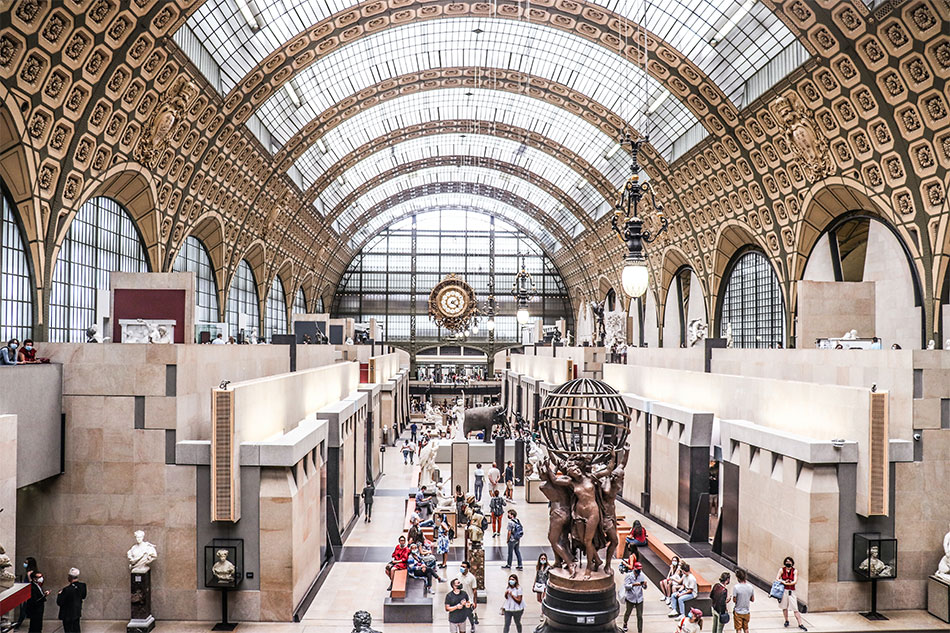 The Musée d'Orsay is the national museum of modern art in Paris, France, located on the left bank of the Seine, diagonally opposite the Louvre and across the river from the Tuileries Park. After the museum, you can also visit the neighboring attractions.

The museum mainly collects French paintings, sculptures, furniture, and photographs from 1848 to 1914. Its far-reaching history is also home to the world's most extensive collection of Impressionist and Post-Impressionist works and Realist works, making it a great experience to enjoy a literary feast for the eyes.

7. The Palace of Versailles 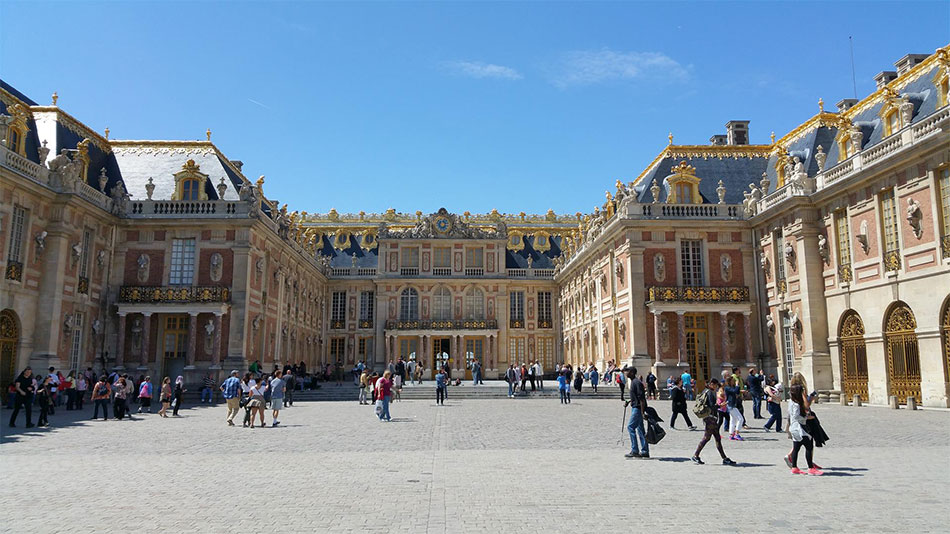 The palace's complex structure, with its exquisite European-style gardens and terraces, is one of the classic sights you must see in Paris. You will see the old French palace with beautiful furnishings, European aristocratic furniture, and fine Renaissance artworks at Versailles.

Suppose you want to see the entire interior of Versailles. In that case, you can begin your tour in the King's Grand Apartment, go to the Crystal Corridor, and the Queen's Bedchamber to see all the court decorations, taking your time to feel the French royal style furniture along the way. You can also browse the famous French Classic Garden in Versailles to handle the French style if you have more time. 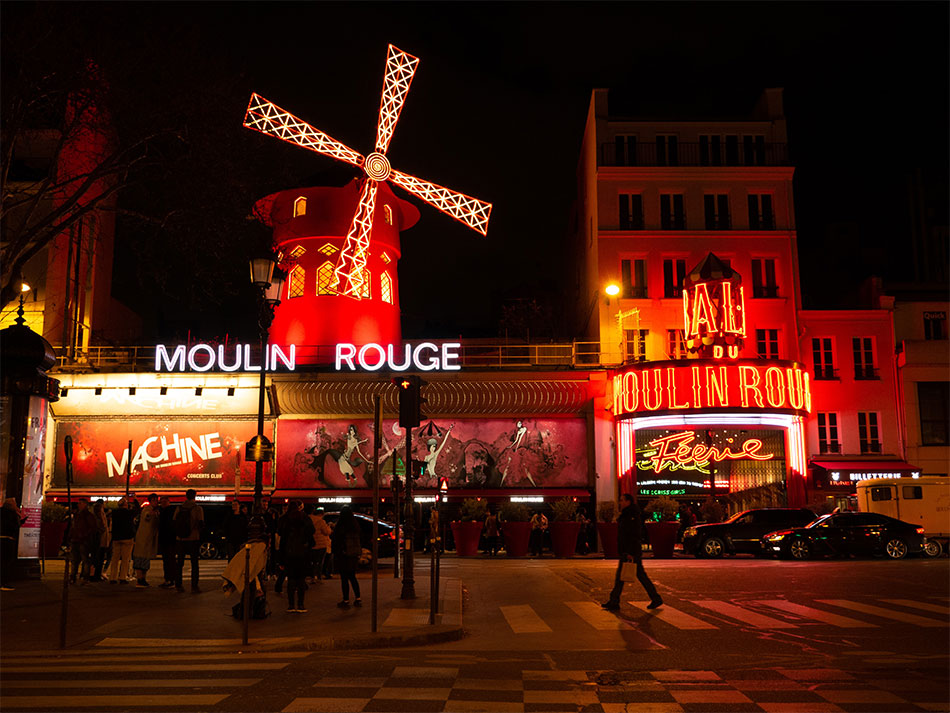 The Moulin Rouge is a famous nightclub in Paris, located in the Pigalle district at the foot of the Montmartre Plateau, and was built in 1889 by Joseph Ole and Charles Caillaud. Originally designed to perform sensual dances, the Moulin Rouge evolved into a nightclub where the entire world could learn about French style through the French cancan. The Moulin Rouge is now one of Paris' most famous tourist attractions, attracting visitors from all over the world every day to experience the romantic Parisian nightlife.

Moulin Rouge is also the movie's name, especially the influential 2001 film "Moulin Rouge" directed by Lehmann, Nicole Kidman, and Ewan McQuaig. The show's form and style have also become a model for several places to follow, like the Las Vegas nightclubs in the United States also imitating the style of Moulin Rouge. 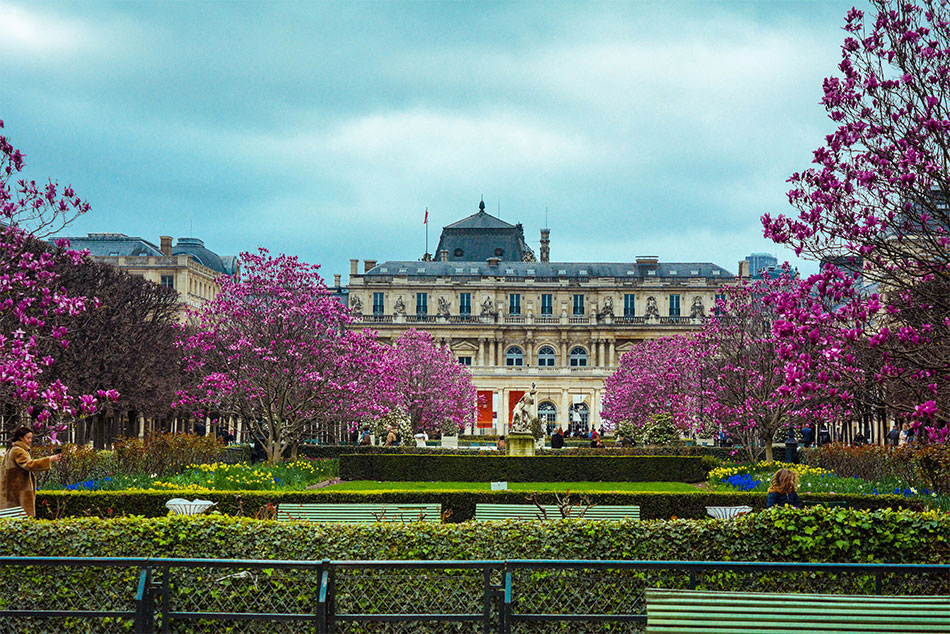 Luxembourg Park is a park in the Latin Quarter, Paris' sixth district, that was formerly an old private garden and was opened to the public in 1612 by Marie de Medici, Queen of King Henry IV of France. The park is located in the Latin Quarter, which is also home to several French universities, including the Ecole Normale Supérieure, Ecole des Mines, Conservatoire Supérieure, and Ecole Polytechnique. The Luxembourg Gardens are now a popular Paris tourist attraction.

Luxembourg Park surrounds the Palace of Luxembourg, which serves as the current home of the French Senate. It was designed by the renowned French horticulturist André Le Nôtre and features 106 fine bronze sculptures, three fine fountains, and an orchard. Various apple trees, an apiary, and an exquisite greenhouse filled with phalaenopsis orchids are planted in the orchard.

Walking through Luxembourg Park will relax you, draw your attention to the landscape, and immerse you in the gardens. Aside from relaxing, the Luxembourg Park is also the site of the French Open tennis tournament, and many photo exhibitions are frequently held in the Luxembourg Park's square. You can also watch a match on the island if you have the opportunity. 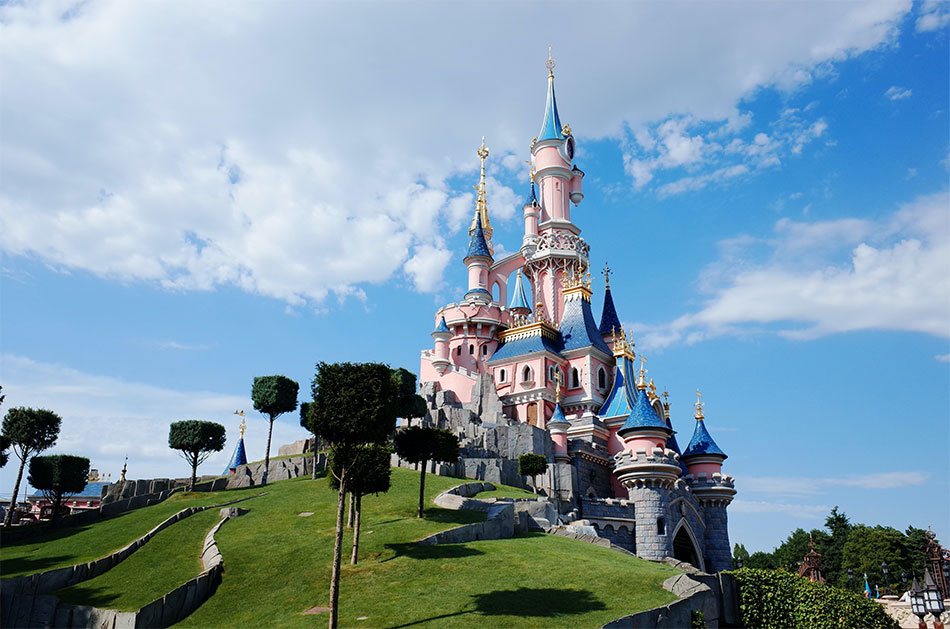 Disneyland Paris is 30 kilometers away from the center of Paris, the second largest Disneyland in the world, is to bring you the innocence and joy of the park, where there are not only entertainment facilities for all, but also restaurants, Disney parade and fireworks show and other classic activities that we often brush to.